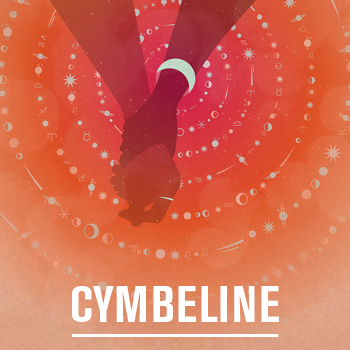 The strong-willed daughter of a king plots her own destiny under the Theater Tent:
Princess Imogen’s stepmother wants to kill her. Her father, King Cymbeline, isn’t coming to the rescue. Meanwhile, Imogen’s banished love, Posthumus, is convinced she’s cheating on him. What’s a lion-hearted heroine to do? Swap the skirts for pants and escape into the magical wilds of ancient Britain disguised as a boy! In this fantastical work from the twilight of Shakespeare’s career, the improbable becomes probable as kind strangers, dastardly villains, ghosts, gods, and long-lost princes pave the high road to Happily Ever After.

Cymbeline features many elements of the fairytales we know and love today — a wicked stepmother, long-lost siblings, disguises, adventure, potions — but also includes references to infidelity, violence, rape, and murder. Although every family’s tolerance for grown-up themes is different, we believe this production is appropriate for school-aged children. Little ones under 5 should stay home.