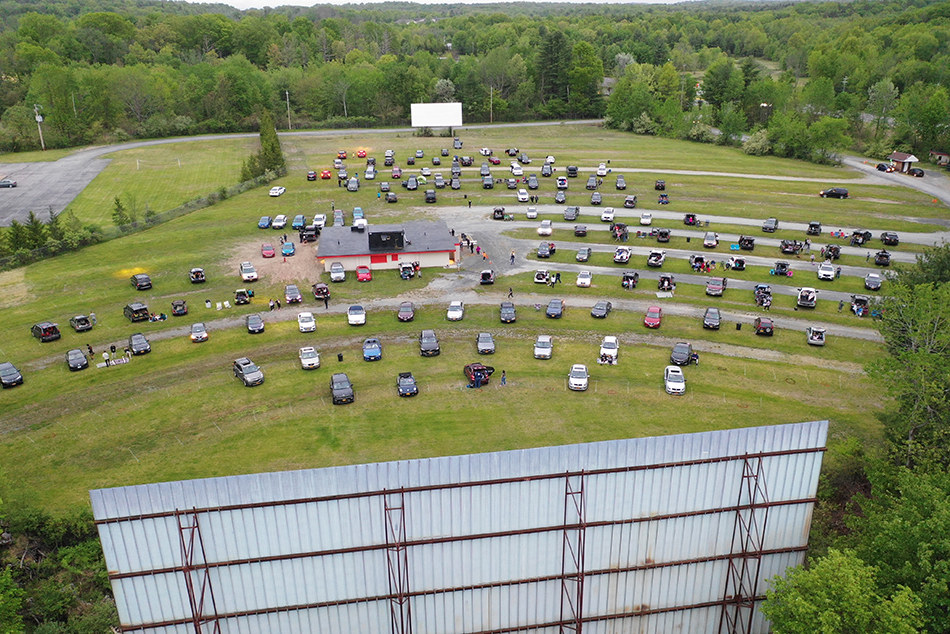 Watch a film under the sparkling night sky at a drive-in movie theater in the Hudson Valley. From classic flicks to family-friendly movies, there is a feature for everyone! Grab your blankets, pack your car, and head to a Hudson Valley drive-in for a perfect summer night.

Four Brothers Drive-In in Amenia provides ultimate entertainment for all ages at their retro-themed theatre. Open seven days a week and offering double features, Four Brothers Drive-In shows comedies, classics, as well as family-friendly and newer films. Movie tickets must be purchased in advance online. Don’t forget to bring your appetites! Burgers, hot dogs, popcorn, shakes, smoothies, and ice cream are just some of the delicious food items to choose from—available to order online from their full-service restaurant. You can even spend the night on-site at their Hotel Caravana—a tricked-out airstream trailer.

Hyde Park Drive-In in Hyde Park shows both classic and newer movies on Fridays, Saturdays, and Sundays. Family-owned and operated since 1950, Hyde Park Drive-In provides a family-friendly atmosphere. Grab a burger, pretzel, popcorn, and more to enjoy during the movie—try their fresh fried dough or a milkshake for dessert!

Overlook Drive-In in Poughkeepsie has been a popular destination since 1955. With a screen that’s as tall as a six-story building, Overlook Drive-In impressively displays newer and classic films as double features on Fridays, Saturdays, and Sundays. Be sure to get your favorite movie-watching candy and popcorn from the snack bar before the film starts! Overlook Drive-In is owned by the same family that owns Hyde Park Drive-In.

Greenville Drive-In, a longtime staple for more than 60 years in Greenville, hosts a mix of independent and classic films throughout the summer months. Get a snack to enjoy during a film, and try local beer, wine, and cocktails from their biergarten. Tickets may be purchased online. As you arrive at Greenville Drive-In, look for their “new” sign—it was formerly the sign at a drive-in in Colorado!

Hi-Way Drive-In in Coxsackie boasts four screens for optimal viewing seven days a week throughout the summer. Originally opened in 1951, Hi-Way Drive-In shows a wide range of movies from classics to animated films. Get some popcorn from the snack bar before your movie begins!

Fair Oaks Drive-In in Middletown hosts double features of classic movies on two screens. Try their mouthwatering cheeseburger with fries or chicken fingers, and grab some popcorn or candy to snack on during the movie—you will won’t be disappointed! Check out Fair Oaks Drive-In’s Facebook page to see the latest movie schedule. Tickets may be purchased online.

Warwick Drive-In in Warwick shows a mix of new movies in double features on three screens seven nights a week. Warwick Drive-In has cultivated an exciting family-friendly atmosphere since 1950. While you’re there, head to their snack bar for popcorn, nachos, and candy to munch on while you watch—what’s a movie without snacks? Tickets may be purchased online or at the box office.

Jericho Drive-In Theatre in Glenmont boasts newer and classic movies under the stars. Try food items, such as onion rings, mozzarella sticks, and chicken fingers from their concession stand for dinner. Then, get a sweet treat from their Twist ice cream shoppe, featuring various flavors of soft and hard ice cream, sundaes, shakes, and more. Look for their ice cream flavor and sundae of the week when you’re there! Tickets, food, and ice cream may be purchased online.

Hollywood Drive-In in Averill Park, located less than 30 minutes from New York State’s Capital City, shows movies seven nights a week in double features. Be part of the history, as Hollywood Drive-In has been open for more than 65 years. Satisfy your sweet tooth at the concession stand, or go for more savory options, like nachos or pizza.

Check the movie schedule, buy your tickets, and get ready for an incredible night out at a Hudson Valley drive-in.

Unleash the Possibilities! Pet-Friendly Places in the Hudson Valley