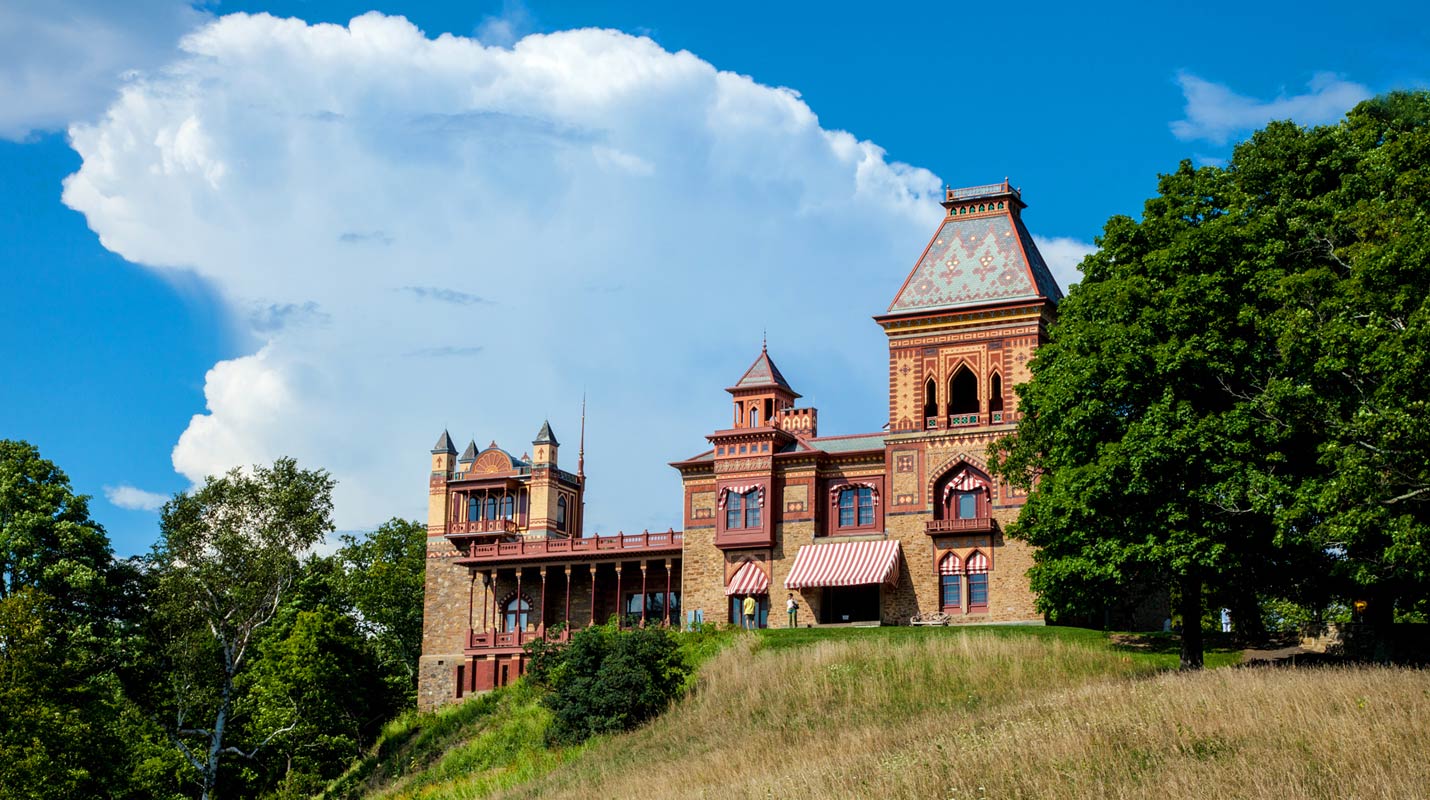 HUDSON, N.Y. — “This is a 250-acre state of mind,” says Steve Blendell as he waves his arm over a verdant expanse of the valley before him.

Blendell, a tour leader, is referring to Olana, the country estate of famed landscape painter Frederic Edwin Church. He easily could have applied that description to the entire 7,228 square miles that comprise the Hudson River Valley.

The valley is a beautiful pastoral state of mind with storybook small towns, cultural attractions, historic sites and havens for hikers, bikers and kayakers. The dreamy Hudson River is a constant presence with the magnificent Catskill Mountains rolling to the western horizon.

For more than two centuries, the region has served as an escape from the clamor and commotion of New York City and other metropolitan areas. The enveloping quietude of farmland, villages and mountains offers a welcome respite. Visitors come to relax, recharge and explore.

The steep approach road to Olana curves gently and invites visitors to appreciate the views as they unfold before them, revealing a small pond, wildflower meadows, lush woodlands and the Hudson River.

Near the summit stands Olana, a landmark house built by Church in the 1870s. For the house design, he drew inspiration from his travels to the Middle East. The architectural gem incorporates a bell tower, pointed arches, balconies, window bays and rooftop pavilions—all to overlook the well-groomed estate grounds against the Catskill Mountains to the west and the Berkshires in the distant east.

Once inside, visitors are consumed by the lavish lifestyle of a well-to-do family of the Gilded Age. Rooms hold treasures and gifts acquired through the artist’s years of world travel. The furnishings are original. Works by various artists fill the walls among the numerous pieces painted by Church himself.

Olana’s real wealth is the beauty of the landscape. According to Steve Blendell, the entire view from the hilltop home is not natural. Instead, Church had a vision of how he wanted the landscape to appear and went about installing trees, planting meadows and digging a pond. All just to his liking.

“This is the biggest oil painting in the world,” Blendell says about the panorama in front of us.

Politics are the canvas in Hyde Park where President Franklin Delano Roosevelt resided at his Springwood estate overlooking the Hudson River. “I am pure Hudson River,” Roosevelt remarked in 1944.

Touring the stone-and-stucco house means being overwhelmed by the history that occurred here, a history well documented in the Franklin D. Roosevelt Presidential Library and Museum, located near the residence.

Several hours easily could be spent in the museum. With FDR, there are many years to cover: the various trials and tribulations of his political ascent, the Depression, the New Deal and World War II. The 1936 Ford Phaeton automobile with hand controls stands bright and shiny blue in a glass case. An oversized globe that once sat in the White House’s Oval Office is on view. Roosevelt used it to follow the movement of troops in World War II. First Lady Eleanor Roosevelt’s many efforts to improve the plight of disenfranchised Americans are well represented also.

The extent to which the president attempted to conceal his long battle with polio is explained in great detail. The library holds thousands of photos, but only four pictures of him sitting in his wheelchair.

Idyllic small towns abound along the 315-mile Hudson River. Explorer Henry Hudson sailed the waters in 1609, leading the way for Dutch seafarers and settlers. Vestiges of the valley’s colonial and Early American heritage remain sprinkled across villages and byways.

Yet, don’t be fooled, because these destinations are not time-locked in past centuries. In many places, artists, musicians, writers, actors and free thinkers have moved in and built thriving cultural scenes.

Beacon, a city of about 14,000 people, was once a hat-manufacturing center. Much changed in 2003 when the Dia Art Foundation opened Dia Beacon as one of its three exhibition sites around New York state. With just under 200,000 square feet of exhibition space, it is one of the largest contemporary art galleries in the country, and it has attracted a huge following.

The glass, steel and concrete building that once housed a Nabisco factory holds gigantic works that most museums cannot accommodate. Andy Warhol’s “Shadows” is a series of 72 silk-screened artworks hung side by side that wrap completely around a gallery space. Richard Serra’s “Torque Ellipse” series contains a grouping of steel-plated spiraling sculptures, each well over 12 feet tall and 20 feet wide, taking up another entire hall.

Contemporary art sprouts from the meadows at Storm King Art Center, an internationally recognized outdoor museum in New Windsor. Visitors experience the harmonious blending of large-scale art and the natural world. A walk across the grounds leads to an encounter with dimension-bending artworks like Alexander Calder’s “The Arch,” which seems to float on its side with one leg more than 20 feet off the ground. Alexander Liberman’s “Iliad,” a powerful red entanglement of steel, cylindrical shapes, soars to a height of 36 feet.

Historic Warren Street in the city of Hudson boasts antiques emporiums, glitzy art galleries, restaurants and bars. Hudson was a prosperous whaling community in the 18th century, then turned into an industrial town. A remnant of its heydays, the Hudson Opera House, has transitioned into a lively cultural and community center. The Hudson-Athens Lighthouse, completed in 1874, watches over Hudson River Park.

The Hudson Valley attracts more than 25 million visitors a year, a number bolstered by its proximity to major population centers and its rail service connections.

Many people are drawn to the Hudson Valley’s best-known destinations. The U.S. Military Academy at West Point is one of the first attractions for travelers departing from New York City. Guided tours are available. The exhibits at the West Point Museum span centuries of military engagement and weaponry.

In Poughkeepsie, students stream from the campuses of Vassar College and Marist College, and congregate in the brewpubs and performing arts venues. They mix with locals at a tantalizing selection of restaurants influenced by the nearby Culinary Institute of America. Another meeting point is the spectacular Walkway Over the Hudson. The former railroad bridge is a 1.28 mile-stroll from end to end.

When traveling north from New York City, the finish line is at Albany, the state capital, where just a walk around the Empire State Plaza with its luminous reflecting pool is something to behold. The state capitol building is a bit of an architectural oddity. Three teams of architects designed the government building in a 32-year construction project. The first floor is Classic Romanesque, while the second and third are Renaissance Classical.

However, the eye-grabber in this plaza replete with stark grey towers is the Center for the Performing Arts, better known as The Egg. It looks like half of an eggshell nestled on pedestal supports.